I am writing this as I look out at one of the most beautiful scenes imaginable—a fresh white snow has blanketed our part of New Jersey. While beautiful to see, the reality of what lies beneath that snow is something else altogether. Power lines, broken tree limbs, destruction to homes, automobiles and lives (as portrayed in the picture below) are now all covered by nature’s perverse sense of humor. It is Day 11, post Sandy and there is no doubt that the disaster that hit the East Coast will be felt for many years to come. 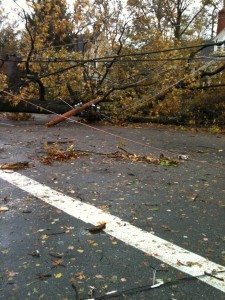 We are still without power but fortunately have a safe, warm place to stay, unlike many of our neighbors sleeping below mountains of blankets in 40 degree indoor temperatures. Even before the last winds died down many of you reached out, asking what the Good People Fund was doing about hurricane relief and how could you help. To everyone I was in touch with my answer was the same…this is a catastrophic event, needs will go on for a long time into the future. Having worked through Katrina, Haiti and 9-11 we know how much duplication and waste can result from acting quickly without a plan. I knew that it would only be a matter of time before the right opportunities presented themselves and we could become involved in hurricane relief in a way that would maximize our impact.

I never expected that only one week after the storm hit we would speak to three remarkable women, all residents of Battery Park City in Lower Manhattan. Though evacuated from their own homes before the storm Terri Pitts, Marnee Spierer and Davi Tardie did not realize that within two days they would take on important roles in helping people affected by the storm. Here’s Terri’s (abridged) description of what happened next:

Immediately after the storm hit, we became a “power source” to our many friends and their children because our power never went down.  Over the course of the first 48-72 hours I received many emails from so many friends and family asking how they could help directly… in a way that would provide aid to the many in need…  Finally, by day 2 I knew that these donors would eventually lose their enthusiasm to frustration so I offered to take in any of their donations – clothing, cleaning supplies, food, etc.  and promised them I’d personally get it to as many people in need as I could.  Within hours my apartment was flooded with bags and boxes.  I have a wonderful friend who is a caretaker for our friend’s children.  This same caretaker is also a Minister on Staten Island and Brooklyn.  I called her and told what I started and then announced I had the contents of which would fill 3 large SUVs and I needed to get it to her.  With gas limited and traffic taking more than 3 hours to go to Staten Island, no one wanted to drive.  I then suggested the Staten Island Ferry. I said, I’ll find away to get the goods on the ferry and off the ferry – you find me four cars to be ready and waiting on the Staten Island side.  10 minutes later, that all came together because coincidentally the New York Runners for Staten Island were heading over the next morning to run from home to home to help those in need by delivering supplies and by doing manual labor.  So, it then became that 25 strangers in one particular running group swooped in and literally hand delivered over 50 bags and boxes to Staten Island via the ferry for me.  It was an incredible sight.

It’s been an exhilarating and inspiring experience to provide a conduit to so many to help that otherwise felt completely stymied.  I can’t tell you how many thank yous I’ve received from people simply saying, “Thank you for finding a way for me to help.” – Thank yous coming from our immediate community, from Westchester NY, S. FL, Portland, OR and beyond.   One mother wrote that she was so moved that she packed up her car with donation items and took her 5-year-old daughter with her to deliver.  Just before they left home her daughter told her to wait, that she needed one more thing.  Her 5-year-old ran back to her room and picked up one of her FAVORITE stuffed animals and added it to the donation pile.  Her mom asked her if she really wanted to donate it, knowing how precious it is and how hard that is for a child that age. Her daughter said, “They need it more than I do!”  That is why we are doing what we are doing – we’ve empowered a 5-year-old to make a difference!

Once I found that supplies were racing to destinations in need, I wanted to prepare for what would be coming down the pike, so we put out a call for Amazon gift cards…

So, we are here and we’ve set up a network…we are on the front lines and we are assessing and addressing needs in real time.  No delays, no guessing, we are getting the facts and we are finding solutions.  Facebook and word of mouth have been our best friends throughout this process.  People care and want to help… Now, needs are becoming greater than a box of garbage bags and I have no doubt we can’t achieve these bigger needs on our own.

The Good People Fund is going to work with Marnee, Terri and Davi. They have already identified several families as well as schools impacted by the storm and we are awaiting lists of items needed. We ask anyone reading this to please donate to the Good People Fund  with either a monetary contribution or gifts-in-kind. We have already been contacted by some groups who are willing to mobilize larger numbers of people to fill a trailer or truck for direct delivery. Working with these three women we hope to change the reality for at least some of those who have lost so much.

The effects of this storm will be felt for years and recovery will be slow.  Good People like Terri, Davi and Marnee and those who help them will surely make a difference.