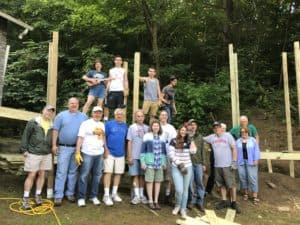 I doubt many people have ever heard of McRoberts, Ky. It’s a small, isolated town — population around 900 — smack in the middle of Appalachia, near the Virginia and West Virginia borders.

After a 12-hour drive from New Jersey, I arrived in McRoberts last week with a delegation of Jewish community service activists from Congregation B’nai Israel in Millburn, where I serve as rabbi. During our time there, our seventh year visiting McRoberts, we deepened our relationships and built on past seasons of engaging in tikkun olam.

One question I am often asked is: “Why Kentucky, when there are so many places closer to home that need help?” Because, I answer, it’s critical that we make a dramatic break from our comfort zones and gain exposure to people and places we otherwise would never encounter.

And now, at a time when the social fabric in our country is severely frayed, Jewish social service projects like ours contribute a small but essential “mending.”

In the post-Hurricane Katrina years, a delegation from our congregation went to New Orleans and the Mississippi Gulf region and, joining thousands of volunteers from Jewish communal organizations across the country, collectively made a significant impact. But it had always been my vision to develop a long-term and ongoing relationship with one place — one community — beyond the more predictable spectrum of Jewish service projects.

Naomi Eisenberger, executive director of The Good People Fund in Millburn, is an old friend and a willing collaborator. When I asked her advice, she suggested McRoberts, located in what may be one of the poorest counties in the nation.

So years ago, we went to scout the area, and I became reacquainted with the rural poor who, as a result of their geographic isolation and a rapidly changing economy, have almost no social or economic infrastructure; McRoberts, being in the middle of coal country, also has few jobs available.

We met middle-aged grandparents raising their grandchildren because the middle generation was caught up in the opiate epidemic. We met residents using water from streams polluted with toxic runoff from mines. We met people whose resilience in the face of adversity was as great as anything I have ever seen.

In 2010, our first corps of social service volunteers arrived in McRoberts. We set to work, repairing houses, painting buildings, cleaning streets and public parks, and unloading and distributing much-needed products from a 40-foot-long food bank truck.

That first year, we were met with resentment and little cooperation. Upon our arrival, the town hall, where we had arranged to store the food, was locked. The mayor, who had the key, could not be found. The forklift we needed was curiously unavailable. Few people would even talk to us. Still, we returned again and again.

One year, the food truck did not show; due to miscommunication, it was never loaded. Naomi and I put our heads together and sent our vans to three grocery stores in the area, 15, 30, and 45 minutes away, respectively. We bought $4,000 worth of peanut butter, pasta, tuna, diapers, and other staples.

The locals asked, “Why? Why are you doing this? The food truck didn’t come; it’s not your fault or responsibility.” I answered for the group: “In the Jewish tradition, when you promise food, you have to deliver — there are no excuses.”

That was when they learned we were Jewish. But more importantly, from that point on, we got enthusiastic cooperation in McRoberts. We had earned a measure of trust and gratitude.

After we returned home, I received a letter from a person in McRoberts, someone I never met; even now, years later, I don’t know who sent it. The letter read in part: “I will tell both of you something few people know about me — I am a victim of incest…. I left home at 18 and married a man that was also abusive…. I live in constant pain…I also lost a son.”

“With my past,” the letter went on, “[I am] a little leery of trusting people and believing people are good and caring. BOTH of you have proved that people that care about the well-being of others do exist….  No words could ever describe how very important that is to me. I am a better person for knowing you and I have you to thank for the healing of my heart and spirit.

“I told you this…so you can understand the impact you have had on my life,” she continued. “The food that you purchased fills the belly — but the love you share feeds the soul. To me, that means so much more…. There are a lot of people here without a lot of hope in their lives. They live day by day just trying to survive the best way they know how and then suddenly ANGELS appear…and they are reminded: Good people do exist.”

And so this year we again made the 12-hour trip to another existence. First-timers, as always, were blown away by what they saw. The situation in McRoberts is unique in their experience, and some of them came home depressed and perhaps a little angry. We will continue to talk about our mission, and some congregants will find that their time in McRoberts has changed them in ways they never imagined.

The most important lesson I have learned is that hope and respect for others are the greatest gifts you can give. That is a lesson sorely needed in these times.