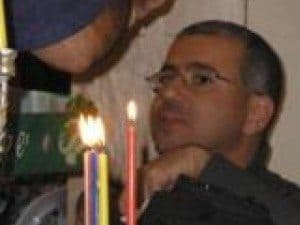 Back on June 14 we shared the story of Avi Ben-Jano who has spent his life in a wheelchair due to Cerebral Palsy. Avi lives in his own apartment at Shalhevet in Jerusalem which allows him independent living and the companionship of other disabled adults living nearby.

Through the encouragement of Miriam Freier, Shalhevet’s dynamic founder, Avi has been able to pursue his passion of film production and has created several films that have been shown locally.

Avi’s latest project is a documentary featuring the moving story of Meir who was paralyzed following an accident. The movie tells Meir’s story and how he and the love of his life, Lee, are raising a family. The film shows that while we may not control what happens in life, we do have the tools to cope with what life brings.

When the Good People Fund was approached about possible funding for the trailer Avi needs to produce so that he could present the film at a prestigious conference on disabilities here in the States, we were happy to provide a modest amount of tzedakah money to make that possible.

This morning we received word that the trailer was completed. Take a look…http://youtu.be/2CrGn4KTMZU. It is certainly a moving story.