DONATE NOW
You are here: Home / Tzedakah Diary / Through Thick and Thin

Cerebral palsy has kept Avi Ben-Jano confined to a wheelchair for his entire life. Until about 8 eight years ago, Avi never experienced independent living; the freedom to choose what he might eat for dinner, the color of the walls in his room, the simplest choices we all take for granted. When Avi was fortunate enough to join the Shalhevet community in Jerusalem his entire life changed. Begun by Miriam Freier, Shalhevet advocates on behalf of adult disabled people, provides opportunities to travel and socialize and has built a beautiful complex of apartments where several reside in their own individual units.

We have met Avi several times in past years when we used to visit Shalhevet. We knew of his interest in film and had heard that with Shalhevet’s support, he had produced several short films which had been well received.

When we got a call recently asking if we night help Avi we were, of course, interested in hearing the story. Avi’s latest project is a documentary featuring the moving story of Meir who was paralyzed following an accident. The movie tells Meir’s story and how he and the love of his life, Lee, are raising a family. The film shows that while we may not control what happens in life, we do have the tools to cope with what life brings.

While the film, "Through Thick and Thin", is nearly completed, Avi’s most pressing need was for funds to produce a movie trailer for marketing purposes, as well as for submission to a prestigious disabilities conference here in America. Could the Good People Fund help with a modest stipend to make this possible?

We agreed and have just heard that the film has been accepted to the Southwest Conference on Disabilities which will take place this Fall.

Our 2021 Annual Report has just been published and it’s filled with moving stories about ordinary people who have done extraordinary things to make our world a better place.

We need it now, more than ever … Read on! 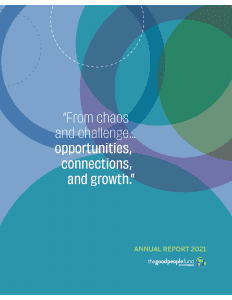