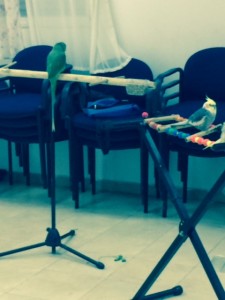 Nothing quite prepared us for our emotional journey to Israel’s southern periphery yesterday where we met with the families and children who have benefited from the extraordinary talents of Shay Agmon, a masterful animal-assisted therapist who also uses his musical talents to help kids with PTSD and other learning problems exacerbated by the 2014 war on Israel’s southern border as well as the ongoing rocket attacks which periodically shatter the calm.  Nemo and Alec, pictured above, are but two members of the bird and rabbit menagerie Shay employs in his work at the local school (but nine miles from the Gaza border).  The Good People Fund underwrote two series of sessions and during this visit we were able to meet not only the kids but also their parents and school officials. After what was a very emotional ceremony during which we were thanked numerous times, we had a chance to speak privately with several parents. Each told us how grateful they were and about the changes in their children’s behavior. The principal, admitting that he was initially skeptical of the program’s value, asked that we consider helping to fund additional sessions with a new group.

As we got on the road to return to Tel Aviv we could not help but agree that the smiles we saw on the kids’ faces and the appreciation we heard from both parents and school officials made this a very special  tzedakah investment.